How to create a “reproducible example”:

Make it easy for people to help you. Give readers a way to re-create your problem on their own computer with a “minimal, reproducible example” of your problem:

Below is an example:

Decide which data to use

Option 1. Use part of your dataset that is in R

Think seriously about whether you are allowed to share it. Ensure there is no patient, identifiable, or otherwise sensitive information.

Save a small part of your data as an object in your Environment, with a name (e.g. “demo_data”). Choose only enough data to demonstrate your problem.

Run the function dpasta() on your object, like this:

Now, in your R script there will appear a command to re-generate demo_data. You can paste this code into your “reproducible example” (see below) so that others can re-create and solve your problem.

2. Now, make an example with the {reprex} package

The {reprex} package can assist you with making a reproducible example:

In the example below, we load packages with pacman::p_load(), use code generated by dpasta() to re-create a small part of our case linelist, then use mutate() and ymd() to try to convert the column onset_date from character to date class. However, we are confused why all the dates have been converted to NA!

Now, copy all the relevant code from your script to your clipboard, and run the following command:

You will see an HTML output appear in the RStudio Viewer pane. It will contain all your code and any warnings, errors, or plot outputs. This output is also copied to your clipboard, so you can paste it directly into an Applied Epi Community post or Github post.

Someone can copy your example and run it in their own computer. They can explain that we needed to use the {lubridate} function mdy() to convert onset_date column to date class, not ymd(), because the raw dates are written in the format month-day-year. 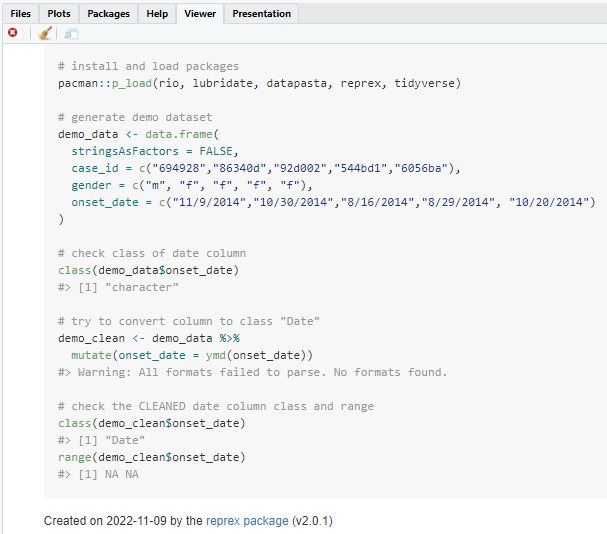 You can paste the “reprex” from your clipboard into an Applied Epi Community post, and other people can now re-create your problem, and tell you how to fix it!